Home > Completion Of The Elucidation

After years of work the volunteers of the ‘Mishne Torah Project’ completed the work on the elucidated edition of Maimonides’ most famous books known as ‘The Mishne Torah’ or ‘HaYad HaHazaka’ after the 14 books it includes.

The initiator and main editor of the ‘Mishne Torah Project’ is Rabbi Yohai Makbili, who works in high-tech for a living and has a masters in electrical engineering. “The project is essentially a volunteer project” he tells ‘Kipa’ and explains that the work is carried out in collaboration with other organizations as well as individuals.
In addition some yeshivas took part in the project for example “Yeshivat Or Vishua” “Yeshivat Torat HaChaim” and “Yeshivat Birkat Moshe” as well as researchers such as Yehiel Cara from the Academy of the Hebrew Language and prof. Zohar Amar from the Bar-Ilan University and more.

“The Mishne Torah is from the treasures of the Jewish peoples masterpieces, a major project which summerizes clearly the jewish law until this day”, explain the initiators of the project. 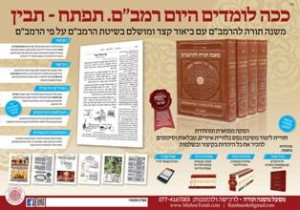 “In well edited fixed halachas, organized and sorted, Maimonides describes: The foundations of Man and Humanity and their sublime tendencies, Jewish law in actions and in philosophy, Torah and wisdom, science and knowledge of God, matters of collective and the individual, the nation’s institutions and individual responsibility.

The vision of this collection is to provide every Jew within a reasonable time span with the possibility to cover the essence of oral Torah, to understand its dignity, its beauty and the sublimity of the Jewish tradition::

‘They can be known in their totality by the great and the small, man or woman, whether [granted] expansive knowledge or limited knowledge'”.

However, they continue, while Maimonides’s book has become something of a bestseller and many scholars and rabbis studied it, traced its origins and coordinated between it and the Talmud, studying the book became the work the province of scholars alone. In addition, the book went through many various and mistaken changes. ‘The Mishneh Torah Project’, add the creators and explain, “returned the book exactly to how Maimonides intended it to be for the general public”.

The books are now used by thousands of learners, as part of the daily Rambam in the religious stream of the public school system and different adults. “The ability to present the essence of the entire oral Torah and explain it in a concise manner, is something inspiring; the precision required, the simplicity in which the entire Jewish Torah is presented, the accessibility to everything (with indices), the clarity, the decision making, Maimonides as a unifying character that all streams in Judaism recognize his greatness are all important tools for shaping the Jewish identity. This is an important undertaking, national, fundamental and classic that has the power to touch each and every one of us”, say the Mishneh Torah Project.